Several days a week, I visit the hotel-bar-restaurant (aka “The Club”) below us to hang out and commiserate with friends about the realities of island life. When we first moved here, I always drove down, like a true American, even though it’s barely a stone’s throw away. But about a month ago, the hassle of driving started to get to me.

First, the road where The Club is located is just one lane wide. So if you meet oncoming traffic, one of you has to back up and let the other pass.  Typically being the less aggressive party, and clearly a “non-belonger,” I tend to be the one to give first in this game of chicken, which means I have to back up the road, into a three-way intersection, with a blind curve to the left and a steep downhill drop behind me. Fortunately, their road is mostly residential and dead-ends at the beach, so there’s not a ton of traffic. But even if I make it there without this harrowing experience, coming home presents another challenge, in the form of parking.

We’re lucky that our building has designated parking and we don’t have to park on the street, unlike many other places here, but squeezing the Jeep into our parking spot is like fitting a hippo in a coach seat on an airplane. Then there’s the fact that you’re backing into the parking spot coming from the opposite side of the road, with blind corners in front of and behind you. Yes, it’s every bit as nerve-racking as it sounds. And yes, I pretty much just close my eyes and pray every time I do it, even after six months of practice. If we ever move back to the States, I will never, ever complain about tight parking spaces again.

Yes, I parked that Jeep, thankyouverymuch.

So I finally came to the realization that we moved to the island to have less stress rather than more of it, and I started walking to The Club instead of driving. I can even avoid setting foot on any “public” roads by taking the stairs to the bottom of our building and walking down a series of driveways that lead from our building’s lower parking area to their back entrance.

Compared to the driving and parking scenario, you’re probably wondering, “Why is walking so bad?” Well, for starters, the hill leading from our apartment to The Club is so steep that it’s not paved with asphalt. No, asphalt would just flow down the hill like lava. As is the case with many roads and driveways here, it’s paved with cement. Take a look in the pictures below.  See those lines in the cement? Those are to help your tires (or your flip-flops in my case) gain a little extra traction. Without them, you would literally slide down the hill.  When our friends visited a few months ago, their rental car couldn’t even make it up this hill!

The first stretch. It’s longer (and steeper) than it looks.

Second are the corners. Because the hill is so steep, there are two switch-backs between The Club and our building. Coming up the hill, the first corner isn’t too bad, except that if you’re walking in the dark and miss the turn, you run directly into a set of concrete steps leading up to a guest house. Guess how I know this?

Not too bad, but don’t miss this turn in the dark!

The second corner is killer though. It’s in the second-steepest portion of the road, and apparently it’s been patched a few times, because rather than being rough surfaced, it’s as smooth as river stone. In the Jeep, if you don’t have enough momentum and don’t hit this corner in just the right place, you have to back up, put it in 4×4, and try again. Walking it is like trying to ice skate, up-hill.

Anybody up for a little (simulated) ice skating?

Then there’s the stretch just before you reach our building. The steepest part. Fortunately, at the bottom of this stretch is a clearing that’s perfect for stargazing on a clear night. Using this as an excuse gives me a chance to stop, catch my breath and get mentally prepared for the next leg of my journey. It’s not a long stretch, approximately 60 paces at my stride. But it’s so steep that you’d better have some momentum, because if you stop midway, you’re going to tumble backwards and roll into the bush, where you’ll be fair game for the wild chickens and lizards.

It 60 paces up this hill, almost as vertical as you can possibly walk (or drive). 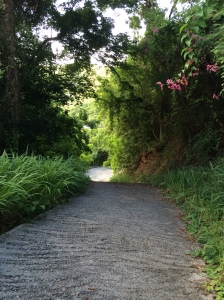 The view from the top, looking down.

Making it up this last stretch to the apartment building is an accomplishment, but it’s short-lived. Technically, you’re home, but there’s one more obstacle between you and the shower:  the stairs. We live on the top floor of the building, which I like because it gives us more distance from the ground and the critters that dwell there. It’s only three stories – 51 stairs – from the ground to our door. But when your calves are burning, you’re panting, and sweat is dripping into your eyes, there might as well be 151. 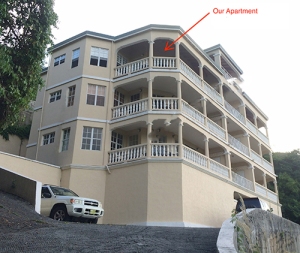 Every time I make The Climb, I think about how it’s a perfect metaphor for living on a rock.  It’s tough, it can be a pain in the ass (or the calves, as the case may be), but it makes you stronger.  And in the end, it’s totally worth it.