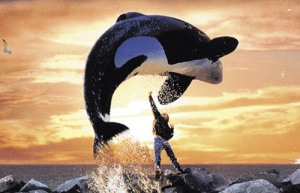 Chronologically, this post is out of order, because frankly, it’s embarrassing and I had initially decided not write about it  But, contrary to what my sister might tell you, my life isn’t always easy or glamorous, and this story very much proves it.  And in hindsight, it is pretty funny…

A few days after arriving on the rock, I made a quick trip back to Charlotte to pick up my sister so she could help me bring back two of my cats, Coco and Smooth, and spend a couple of days here experiencing the island.  The two cats we were tasked with transporting are pretty timid – Coco is afraid of almost everyone except Bill and me, and although Smooth has gotten more sociable in his old age (he’s 13), he’s still very much a loner.

During our initial move trip a few days earlier, Bill and I had brought down the first two cats, Trouble and Snowball.  They did great getting in & out of their carriers and going through security, so I was hoping for that part of the process with Coco and Smooth to be quick and relatively painless.  My worry was that one or both of them would cry through the entire flight, like our little “angel” Snowball had done during her journey.

Boy was I worried about the wrong thing…

At the airport, we managed to get Riley into the TSA prescreen line with me, so I was doing a little victory dance in my head, as that meant we didn’t have to deal with the laptops/liquids/shoes in the security line and could just focus on getting the cats out, through the scanner, and back in their carriers as quickly as possible.  And we picked a security gate that, when we got there, was virtually deserted.

I was in charge of Coco and Riley was in charge of Smooth.  I took Coco out of her carrier, walked through the scanner, and waited on the other side for her carrier to come through the x-ray machine.  Just as we got through the scanner, she started wriggling.  And as we waited for her carrier, the wriggling got more intense and quickly turned into full-blown “let me down now or I will claw your eyes out” flailing of limbs and tail.  I was trying so hard to remain calm, and I said to the agent screening the x-rayed items, “Sir, I need that carrier as soon as you can get it to me, please.”  The TSA agent standing at the end of the conveyor saw the cat getting more and more agitated and said to her colleague, “You need to get her that carrier, quick.”  And out it came.  Then, before I could reach it, in it went again – back into the x-ray machine!  It was like slow-motion, and all I could do was say, again, this time in a much more urgent tone, “I need that cat carrier now, please!”

At that moment, Coco launched out of my arms and ran.  As I watched her scurry away, hunched down and looking back to see if anyone was following, I heard a TSA agent yell “Animal on the loose!”  All I could think was, “They’re going to shut down the airport and it’s going to be my fault!”

I started ducking and weaving through the rope barriers that make up the security lanes, with what were now at least 20 people in line yelling various renditions of “she went that way,” and “she’s over there!”  Luckily, she had found suitable refuge behind a post in the corner and stopped, thinking she was hidden.  About halfway to where she was, I realized that I couldn’t do a darn thing without her carrier, so I yelled to a TSA agent, who was yelling at me for letting her get loose, to get me her carrier.  Someone got me the carrier and I was able to scoop her up and get her back in, where she was more than happy to be, with fabric, mesh, and zippers protecting her from all these crazy people around her.

The agent that was helping me at this point was so nice.  I was apologizing profusely and he tried to console me by saying, basically, that the agent doing the x-ray screening had been an ass all day long, being slow, calling for tons of extra scans, and making everyone’s day miserable.  (I think this incident took the cake for the entire day.)   He calmly informed me that I’d have to go through security again since I was now outside of the official security zone.  (Seriously, I was on the other side of a couple of 3-foot metal poles with a zippy rope between them, but whatever.)  I asked him to please find a way to do this without having to take the cat out of her carrier again, and he assured me that he didn’t want to go through that again either.  So he walked Coco, in her carrier, through the security gate as I went back through the scanner.  And this time, we were both free to go. 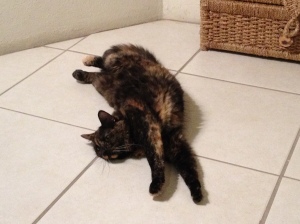 Coco, lounging in our BVI apartment, oblivious to the near-breakdown I had getting her here.

The best part is that while all this was happening, my sister and the other cat made it through security with no problems.  And when the madness was over, she, Smooth, and our carry-on bags were all waiting patiently at the end of the screening lane.  For her, it was just another adventure with members of the Nolen family.