Our first Christmas in the Caribbean! Or, as we call it, Thursday.

I used to envy people who spent Christmas in the Caribbean. Escaping the cold. Avoiding the hours of cooking, days of cleaning, and weeks of decorating that so many of us spend in preparation for the holidays. (Not to mention the cleanup and un-decorating that follow.) Don’t get me wrong, though. For me, Christmas is the most special holiday of the year, with its combination of family-centeredness and religious importance. But if we’re honest, most of us would admit that it’s a lot of work – physically, mentally, and sometimes, emotionally.

Now that I’m one of those who has escaped the hustle and bustle and celebrated Christmas on a tropical island, I’ll share some of the differences, oddities, and adaptations that come with spending the holidays in paradise.

The months of November thru February are the things I miss the least from back in the States. Since I recently wrote a post regarding the brutally hot months of September and October here on the rock, I should point out that the heat has, thankfully, subsided. The weather has returned to a Goldilocks state of warm, but not too hot, with the Christmas winds providing a cool breeze when you’re sunbathing on the beach. But as far as the holiday season goes, it’s a bit odd to celebrate without at least once wearing my favorite red wool blazer or fuzzy snow boots. (Not that I ever really needed to wear snow boots in North Carolina, but on the few days when the temperature dipped below freezing, I could sort of justify them.)

This Christmas, instead of traipsing around the Southeastern U.S. dressed as though I live in the Arctic Circle, I’m spending most of the holiday in climate-appropriate attire:  shorts and a tank top. Christmas Eve Day was celebrated at the beach, and Christmas afternoon was spent outdoors as well, with brunch at our favorite restaurant. And sometime between Christmas and the New Year, I plan to do SUP yoga again. While I miss a few of my favorite winter clothes, I’ll take a bathing suit and flip-flops over turtlenecks and socks any time.

If I see anyone on my rock wearing these, there will be a drowning.

I love holiday decorations – all of them.  Green, red, gold, blue, silver, white, big bulbs, little bulbs, Santa, reindeer, trees, manger scenes, the Grinch, candy canes, gingerbread men… You get the picture. I think this appreciation for all things shiny and bright came from growing up just a few miles from Christmas Town USA. And this is the thing I miss the most about Christmas back home – decorations at every turn. Everything from the immaculate displays in department stores to lights haphazardly strung around trees.

Since Tortola doesn’t have a) shopping malls, b) neighborhoods with many houses in close proximity, or c) reasonably priced power, I barely saw any Christmas decorations this year. There were a few exceptions, though. Both of the roundabouts in town were decorated, and there was a gorgeous Christmas tree just across from the ferry docks. 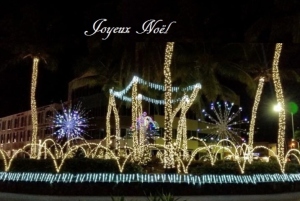 For reasons of space, cost, and practicality, the only Christmas decor that we brought with us was a table runner given to me by my best friend. My sister, however, had other ideas about our holiday decorating.  She insisted that everybody needs a Christmas tree, and sent us a small, wooden tree that I had purchased for my niece’s bedroom when she was a baby. Despite missing my own decorations and the mega-displays of lights and bows and garland, I must say that the decorations this year seemed more special.

Because everyone needs a Christmas tree!

According to Facebook posts from Stateside friends, some stores were displaying Christmas decor alongside Halloween decor this year! Surely this confuses the kids? “Mommy, I want to be a ninja for Christmas.”

It won’t be long until this happens.

Here in the BVI, there’s no problem with Christmas burnout. Holiday activities don’t even begin until the first week in December. Which makes the holiday season seem incredibly short for those of us who take the Macy’s Thanksgiving Day Parade as the official start of Christmas.

In terms of consumerism, because shopping options are so limited on the island, there are virtually no Christmas sales to lure you into the misconceived notion that you Must. Buy. All. The. Things. A few local stores tried to capitalize on the Black Friday phenomenon (despite the fact that Thanksgiving and the day after are not holidays here, so everyone’s at work). But when you’ve memorized every store’s inventory, with virtually zero chance that they’re carrying anything you haven’t already seen, there’s not much incentive to go Black Friday shopping.

As for online shopping, I’ve discovered that if you have your name and email removed from the mailing lists of major clothing and home decor stores (I’m talking to you, Ann Taylor and Pottery Barn), there’s virtually no temptation to spend money. It’s amazing how much your desire to spend is curtailed when you actually have to cultivate the mindset of, “Hmmm, I wonder what new things are out there that I might want to buy this Christmas?” and go online and search for them. It’s just much harder to do when you have to search it out than when it’s presented to you in a sleek, glossy catalog or clickable links.

Santa is another thing (person) that’s not as ubiquitous here in the BVI as it (he) is in the States. Again, without shopping malls or big shopping centers, there are no places on the island to go visit Santa. He has to come to you. And from what I’ve seen, he’s only made a few appearances here on our rock. Unlike in the States, where parents actually make up stories about how Santa has “helpers” so he can be everywhere at the same time – to explain when the kids see him in three stores in a row. “But the Santa you had your picture made with was the REAL Santa.”

Most of the people who vacation in the BVI either charter or own a boat, as this is the sailing capital of the Caribbean. And with a relatively small number of hotels on the island (the “no franchise” law means there are no Hiltons, Marriotts, etc.) we’re spared the huge influx of tourists that places like St. Thomas and the Turks and Caicos see during the holidays. So we’ve been pleasantly surprised that the holiday season hasn’t resulted in a significant increase in tourons on our rock. (No offense to anyone who has or may in the future come to visit us. We’ve all been a touron at some point.)

Although the cruise ships do become more frequent in December, the only place where the tourists can be overwhelming is at Cane Garden Bay – the most popular beach on Tortola. They arrive like a flock of birds, descending on this beautiful beach for a few hours before banding together and migrating back to their floating hotel. If you want to people-watch, go to CGB when a cruise ship is in.

And the migration begins…

Back to the private and charter boats, which house most of the tourists in the BVI… I had seen some large yachts cruising these waters over the past few months. But the size and sheer number of megayachts that are here over Christmas makes you wonder how many billionaires there actually are in Russia. I have to say, though, it’s pretty cool to watch the yachts travel back and forth across the bay. And when I spot a really big boat, I break out the binoculars to see if I can spy a celebrity sunbathing on the deck. No luck so far, but with so many boats this time of year, the odds are in my favor.

This is my first Christmas ever spent away from family, and it was harder than I expected. We’re fortunate to have made good friends in our first eight months on the rock, and being around them helped tremendously over the past few weeks. Even though a lot of our fellow expats are off-island for the holidays, the ones who stayed in the BVI gathered together on Christmas Day and talked about our former traditions back home and new traditions here on the rock.

Technology also helped us through Christmas morning. With my 7-year old niece holding the iPad on their end, FaceTiming with the family was a bit like watching The Blair Witch Project, but we enjoyed seeing everyone on Christmas. And we have an unlimited plan for calls back to the States (one monthly bill that I don’t mind paying), so we got to talk to a most of Bill’s family and many of our friends. Of course, it’s not the same as being there, but technology is a godsend for those of us who live far away from home. I can’t imagine doing this ten years ago, before FaceTime, Skype, and iMessage.

In the end, Christmas in the Caribbean was just as I expected – warm, quiet, and unhurried. But to my surprise, it also made me appreciate Christmas back home. 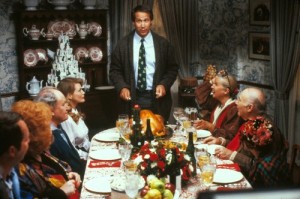 There’s nothing like celebrating Christmas with your dysfunctional family.