That’s the email I received from my ex on Tuesday night, September 5, barely 12 hours before Hurricane Irma began to terrorize the BVI.

(I can only guess by “two hits” that he was referring to the tropical storm that had flooded much of the BVI a month earlier, along with the upcoming storm, Irma.)

But Irma is nothing to laugh about. It devastated the entire British Virgin Islands chain, not to mention St. Barths, Barbuda, Saint Martin/Sint Maarten, Anguilla, St. Thomas and St. John, before moving towards the Bahamas and the US. I don’t know the total death count from the storm, but estimates in the BVI range from 5 to 15. Regardless, any loss of life is tragic. Not “lol.”

I’m one of the most fortunate people in the BVI. My apartment building is intact, and while there is massive cleanup to be done both inside and out, I didn’t have any major damage. Four out of the six apartments in my building lost windows. The majority of homes on the island lost their roofs. And even of those that didn’t lose their roofs, most lost some or all of their windows, meaning hurricane force winds and rain destroyed the house from the inside out. My house has a roof and all its windows. I’m in the 1 percent.

I prepared for this storm for two days prior, stocking up on water, canned foods, and cat supplies. I took everything I could off the counters, coffee table, dressers, etc. My apartment looked like it was vacant of tenants. My landlord boarded up all of the windows on the front of the building (facing north/northeast), including one side of my glass French doors. (He couldn’t board up both sides, because those doors are the only entry into my apartment.) I’m glad he did.

My windows were boarded up. I had put away all of my “decorative” items and moved as much stuff off the floor as I could.

I had told my parents a few days prior to Irma that I wasn’t in fear for my life with the upcoming storm. My fear was of the unknown – will the roof hold, will the doors blow in, will debris smash through the windows…

Knowing that winds would be 150 mph or more, I made mental plans of what I would do if any of these things happened. My bedroom closets are the built-in king (not framed into the house) so they have a ceiling structure that’s below the ceiling of the apartment. That would be the first choice of places to go if I didn’t feel safe. Next would be the master bathroom, since it has just a relatively small window over the shower, and I would take my patio cushions, which are as thick as sofa cushions, to protect the kitties and me. I was prepared, logistically and mentally, I thought.

Wednesday, September 6 – Irma hits: The wind began to build during the morning hours, and the electric company cut power to the entire BVI around 6 am, hoping to avoid unnecessary damage to the electrical grid. I messaged my family and my boyfriend, Ari, around 8 am. “The wind is crazy. I can’t imagine how it will be in 5 hours” (when the eye was projected to pass over), “but everything is ok.” I read, dozed a little, and watched through one of the bedroom windows (that wasn’t boarded up) while everything I could see was violently destroyed. Trees fell like dominos and pieces of debris flew all around.

By 10:30 am, cell service was getting spotty, but I could still send messages to let family and Ari know that I was ok. I ventured into the living room to check on the rest of the house. My front doors (the glass French doors) – which have steel rods that come out of the top and bottom and latch into the cement door frame, along with a deadbolt holding them together – were groaning and straining against the wind. By 11:30 am, the storm had gotten unbelievably loud, with no breaks in the wind, rain, or noise. By this point, every tree within sight had its top snapped off, and the remnants looked like they had been corkscrewed. There was hardly any vegetation left anywhere. It looked like a bomb had gone off in Josiah’s Bay.

Josiah’s Bay, taken during the eye of the storm. Most of the houses you see in this picture weren’t visible before the storm due to the lush vegetation and trees in the valley.

By around noon, the apartment was shaking like there was a never-ending earthquake. I never thought I would doubt my apartment building’s ability to remain standing, but that fear was running through my mind. I knew we were getting near the eye, because my ears were popping like crazy from the change in pressure. I ventured out of the bedroom to check on the rest of the house. In the living room, the board and reinforcement on the one French door was gone, and both doors were bending and flexing so much that water, leaves and dirt were rushing and blowing in. I tried to move furniture out of the path of the water and debris, but it was already soaked. I doubted the doors would hold much longer.

The situation was similar in the kitchen, with the kitchen windows over the sink flexing and bending so much that a huge waterfall was pouring in. It was so strong, the water didn’t even flow into the sink below – it came right through the windows, down the edge of the countertop and onto the floor. I threw as many towels as I could around the window and on the floor, but they were immediately soaked. I arranged one towel so that the water running from it would pour into a two gallon pot on the floor, but the pot filled and overflowed right away.

Just before the eye hit, mortar started raining down from the ceiling in the master bedroom.

All of this took maybe two or three minutes. I went back into the bedroom with the intention of putting the kitties in the bathroom and joining them. But as soon as I got them into the bathroom, mortar from the ceiling in the master bedroom started raining down on everything, pelting me like a hailstorm, and water started pouring down one of the exterior walls. I thought to myself, “The roof is going to go.”

I pushed the furniture to the middle of the room, threw the kitties in the master closet (thinking it was the safest place for them since I could just keep them there and not open the closet doors for the rest of the storm) and took refuge – not in the master bathroom as my original plan had been – but in the second bathroom, which is on the back side of the apartment.

Like the master bathroom, it has a small window over the shower, and I could see pieces of metal roofing flying by the window. I laid down in the shower and covered myself with patio cushions and prayed. For the first time in almost 44 years, I was afraid for my life.

As soon as the eye came and everything was calm, my landlord, Greg, rushed up from the floor below to check on me. I showed him the damage so far and explained what had happened. He tried to reassure me that the mortar that had rained down was simply used to fill in the cracks where the wooden interior roof structure sits on the poured concrete wall. As he put it, “It’s functional, but not structural.” I wasn’t convinced.

There’s supposed to be a door there.

The door that leads from the stairwell to my patio had also blown off – torn right off the hinges. Fortunately, it was laying on my patio and didn’t become a projectile. He picked it up and put it in my living room.

We went out onto the patio to survey Josiah’s Bay. It was surreal. What he had described just a few days prior as a “big green cushion” was a wasteland. There was no vegetation over three feet high, and no green anywhere in sight. It looked like there had been a massive wildfire. You could see every house, every car, everything in the entire bay and valley. There were very few houses with roofs still intact.

I saw my friends “bear” Chris and Horacio on the roof of their building below me, surveying the damage. I yelled down to them to let them know I was alive. It felt good to see friends and have some limited communication with them. 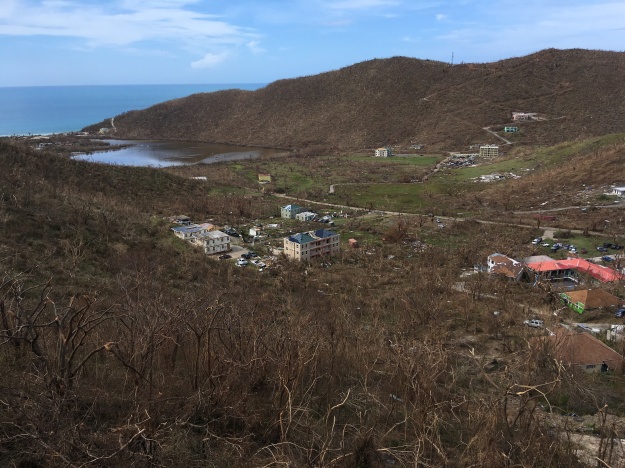 Greg prepared me for what the second half would be like – winds from the opposite direction and probably not as strong as the first half, but there would be more rain. He was right. I managed to send a basic text message to my family and Ari that the eye had passed and we were in round two. “It’s scary as hell and we’re freaked out, but we’re ok.” At the beginning of the second half, I left the kitties in the closet and I stayed in the second bathroom, but as the storm tapered off around 4 pm, I ventured out and let the kitties out of the closet. By the time the storm ended, it was too late to walk down to Tamarind Club or into Josiah’s Bay to check on my friends.

I cleaned up what I could of my partially flooded apartment, tried to eat, and more importantly, tried to sleep. But my mind wouldn’t let go of two thoughts: how much devastation Mother Nature can inflict, and what the next days and weeks would hold.