Anyone who’s a regular reader of this blog knows that I have a lot of friends here on Tortola, most of whom are a short (albeit precariously steep) walk down the hill from our apartment. But for 12 days earlier this month, I was, technically, alone—without my partner, my significant other, and my companion—while Bill was back in the States, getting his health checkups and visiting family and friends.

This was only the third time in our 19-year relationship that he’s traveled and left me at home alone, and the previous two times were only for a few nights each. Granted, for over ten years, I traveled extensively for work, mostly without him. But when you’re the one who’s doing the traveling, you’re far from alone. There are tons of people at the airports, hotels, and restaurants that become your temporary home-base. And there are meetings with colleagues, customers, or tradeshow attendees. So being the one who leaves is quite different from being the one who is left.

During Bill’s previous two trips, I was working in an office, so between being at work all day, going to the gym, and running errands, I was barely home to notice his absence. Which made this time even more unique, since I’m now working from home, with my living room being my gym, and the only pressing errand being a trip to the grocery store. So nearly every waking hour was spent here, at the apartment, without his presence.

Soon after Bill’s departure, I discovered that even on a small island, where you literally can’t go anywhere without running into someone you know, it is possible to be very, very alone. I hadn’t watched TV since the beginning of the year, yet during those twelve days he was gone, I turned on the TV just to simulate having someone else around. But virtual company is a poor substitute for the real thing, so nearly every evening, I was compelled to visit one of our favorite hangouts, in search of people to talk to. (Confession: I talk to my cats, but they’re not very good at keeping up their side of the conversation.)

The upside of being alone was that my daytime productivity went through the roof. The downside was that I had to do everything that Bill normally does—including lug five-gallon water jugs up and down our stairs, re-light the stove pilots when they went out, haul off the trash, and wash the Jeep. This resulted in the realization that although he may have fewer domestic responsibilities than I do, they’re exactly the ones I can’t stand doing. Note to self—no more (or at least less) grumbling about the uneven split of household chores.

Thanks to FaceTime and unlimited international calling plans, we were able to talk every day, with multiple phone calls on some days.  And every time we talked, Bill would boast about the speedy internet, or what restaurants he visited, or what he went shopping for that day. He truly enjoyed his time back in the “real world.” But to me, his depictions of and enthusiasm for life in the States didn’t compare to the warm weather and breathtaking views of early spring in the Caribbean that I was enjoying. Although I would prefer not to go about it alone, I’m still quite happy here. And after almost two weeks, I’m very glad to have him back on the rock with me. 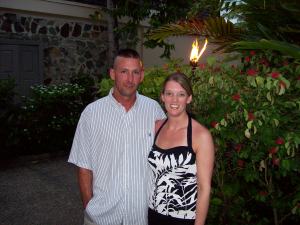